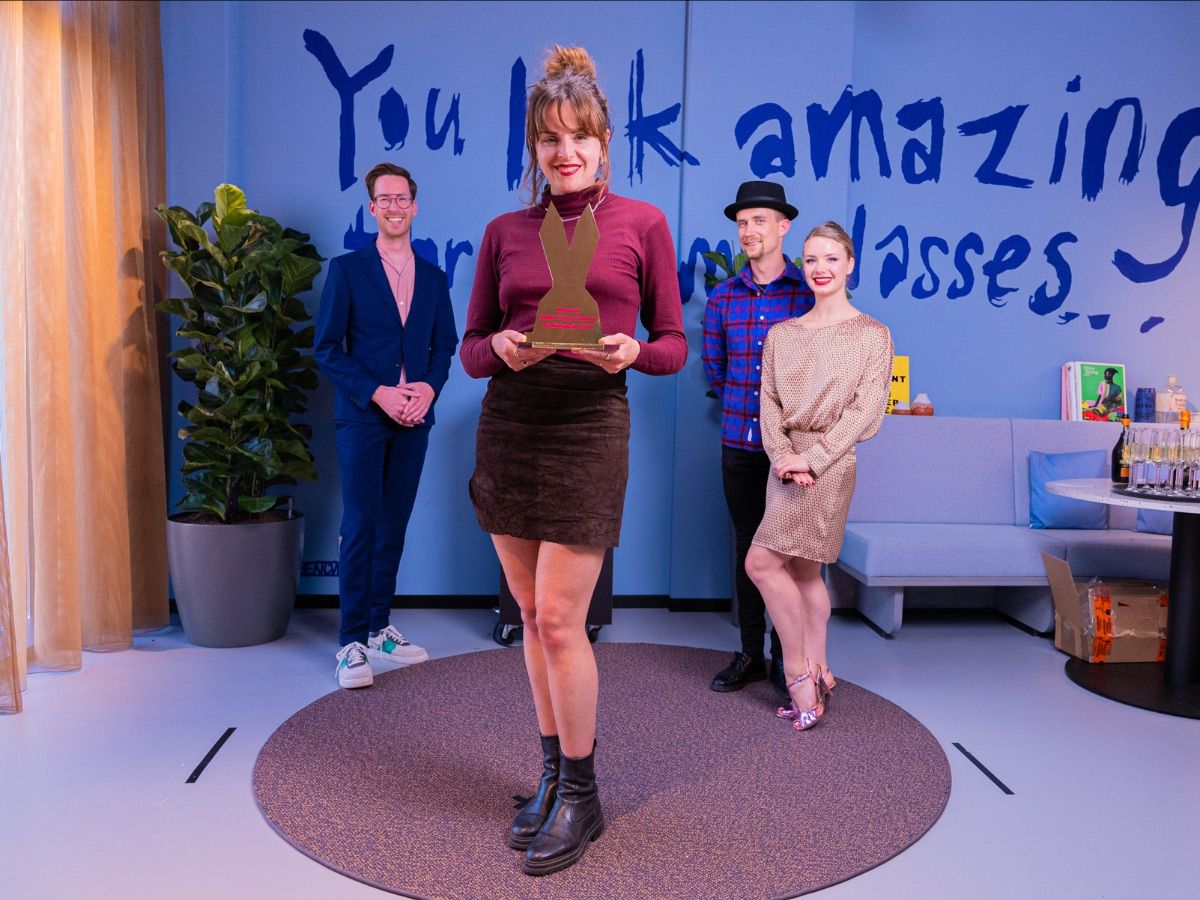 All digital votes have been counted and the winner is known: Tappin-It Collective wins the audience award of the Delft Fringe Festival 2021 with their performance IRMA! By winning this prize, Doortje Peters and Robin Lie of Tappin-It Collective are assured of a spot at the next edition of the festival and they can be seen as the campaign image of 2022.

During the online award ceremony on the last festival day, Dion van Rijt, the previous audience winner, presented the audience prize, in the form of a Golden Rabbit, to Doortje from Tappin-it Collective.

"We are very happy with this award! The online festival was really a unique experience, but it was also very crazy to play without an audience. It is therefore nice to get feedback in this way that people liked it!", says Doortje in her first reaction.

Roel Beeftink - Funcken, director Delft Fringe Festival, is also proud of the 2021 winners: "Tappin-It Collective has developed a whole new promising genre in the performing arts with their theatrical tap dance performance. The audience rightly rewarded this by voting for them."

Doortje and Robin got the inspiration for their performance IRMA from the corona virus press conferences that feature sign language interpreter Irma Sluis. This gave them the idea of converting sign language to tap dance. Based on this they created a complete musical dance performance about the changing forms of communication and language in our modern (pandemic) world.

In addition to the audience award, the Delft Chamber Music Award is also presented to young musical talent on the final festival day. This year the jury prize goes to Duo Sola, consisting of Myrthe van de Weetering (voice & violin), Héctor Hervás Veredas (cello), Thijs de Klijn (guitar) and Yga Wagenaar (dance). According to jury member and artistic director Nino Gvetadze, the musical arrangements felt like they were created right in front of you.

"We have very high praise for the storytelling, the sense of color and timing of the performance." Myrthe accepted the award digitally: "I think it's really awesome that we won this award. It's a great honor."

Delft Fringe Festival experienced an online edition this year. This brought great opportunities, also in the form of new collaborations. For example, for the first time there was an evening of Studium Generale on the program and young writers wrote essays about the performances of the young producers under the guidance of Domein voor Kunstkritiek. In addition, Delft Fringe Festival developed an educational program together with TU Delft, from which the new festival pavilion in the form of a 7-meter-high origami rabbit emerged.

The Fringe 4 Kids program line, for children up to 12 years of age, also spread its wings this year. The family performances were not only part of the regular festival program, but also found their way to schools. Several schools in Delft (PO & VO) watched a performance in class this year, whether or not linked to an online workshop by the producers themselves. In this way, even more children come into contact with the performing arts at a young age.

The 2021 festival edition may be over, but Delft Fringe Festival still has plenty of plans! In honor of the festival's tenth anniversary, a Delft Fringe Night XL will take place on Saturday, September 18. Audience favorites Dion van Rijt, Sanne Vleugels and De Gestampte Meisjes will be on stage at Theater de Veste that evening.

Save the date: the next edition of the Delft Fringe Festival will take place from Thursday, May 26 to Sunday, June 5, 2022. That means 11 days of cultural enjoyment!

What did you think of Delft Fringe Festival 2021?

To make next year's edition a success, we are curious about your experiences and tips! Let us know by filling out the short survey below. It will take about 5 minutes and the results will be processed anonymously. Thanks a lot!

We are extremely grateful to everyone!

The Delft Fringe Festival can only be realized with the help of funds, partners, friends, sponsors and the selfless efforts of numerous locations and volunteers. We are extremely grateful to everyone who contribute and especially to the participating producers for their inspiring contributions.