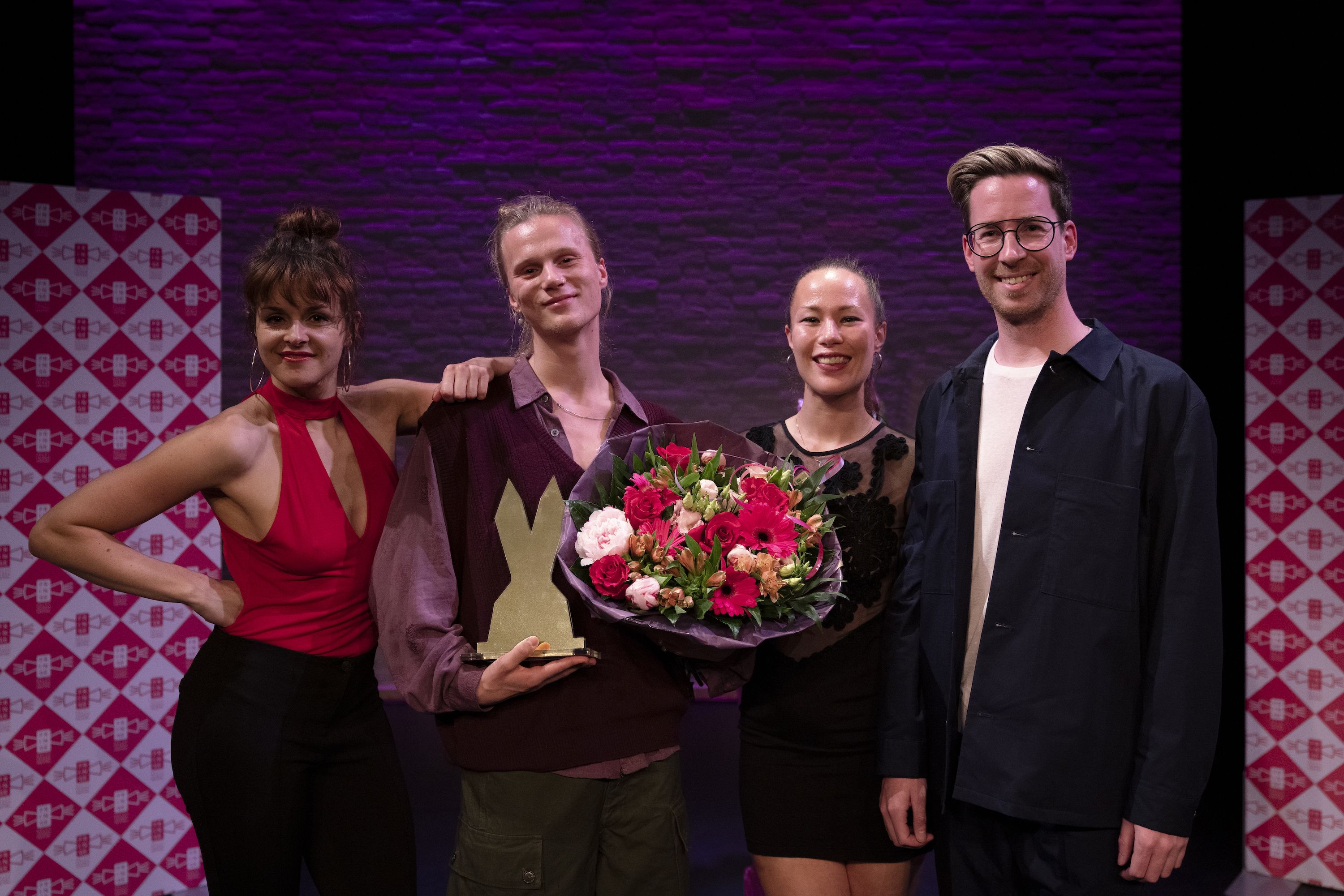 All votes have been counted and the audience award winner of Delft Fringe Festival 2022 has been decided: dancer and choreographer Niek Wagenaar (22) wins with his performance 'Nymphs'. By winning this prize, he is assured of a place at the Delft Fringe Festival in 2023 and is the campaign image of the 12th festival edition.

During the award ceremony on Sunday, June 12, the last festival day, Doortje Peters and Robin Lie of Tappin-it Collective, the previous award winners, presented the audience prize in the form of a Golden Rabbit to Niek Wagenaar: "I am really so happy! I really didn't expect to win, the quality of the artists in this edition was really high!" According to Rémon Beeftink, artistic director of the Delft Fringe Festival, Niek Wagenaar is the rightful winner of this festival edition: "Niek knows how to touch people right in the heart with his performance. In a soft and enchanting way, this young choreographer captures the feeling of sensuality, gender identity, freedom and security.”

With 'Nymphs' Niek Wagenaar makes his debut in the world of Dutch dance. In the performance, five dancers go in search of their own identity and beauty in which they are constantly in conflict with the norm. "Entangled in a web of social constructions the dancers move towards connection", describes Niek Wagenaar.

In addition to the audience award, the Delft Chamber Music Award is also presented to young musical talent on the last festival day. This year this jury prize goes to Sanne Vleugels and Sam Eggenhuizen of the Prima Donna's with the performance "Leuk Geprobeerd!". "The Prima Donna's performance is really a lot of fun. They sing and act well and it gives you energy as a visitor!" said Bart van der Steenstraten, chairman of the Delft Chamber Music Festival

The Prima Donna's performed an opera performance at Delft Fringe Festival in which they use a good dose of humor to break through the pigeonholing of sexuality, identity and gender. By winning the jury prize the Prima Donnas are assured of a place at the Delft Chamber Music Festival in 2023.

Identity as a theme

Both Niek Wagenaar's performance and that of the Prima Donna's are about identity. "With the developments of recent years, it's not surprising that more and more young artists are looking for topics close to themselves in their work," says Beeftink. "In doing so, looking critically at identity, gender and inclusion is high on the agenda. Are you allowed and able to be who you are? Do you get as many opportunities as anyone else? The questions are open on the table, the cards are dealt. The latest generation of artists is much more conscious of these themes and they make well-considered choices about them in their work”.

A live festival, after three years

After a cancelled edition in 2020 and a digital edition in 2021, the Delft Fringe Festival went live again this year. "It was another festival like the old days. I saw a lot of happy faces, artists parading again and enthusiastic volunteers at every venue," said Roel Funcken, Delft Fringe Festival director. "I am also enormously proud of this year’s program. There were so many substantive interesting stories told at familiar but also again new surprising locations throughout the city." The reactions of visitors match Funcken's words, they spoke of moments of goose bumps and of having to suppress emotion. But also about open-mindedness, pleasure and excitement. Sometimes a performance left question marks and sometimes everything fell into place for the visitor.

Springboard to a national career

Delft Fringe Festival is one of the most important and largest performing arts festivals for young artists in the Netherlands. Over the past eleven days, 43 up-and-coming artists have played their hearts out in Delft. There were a record number of festival locations (26) and no less than 22 artists played the premiere of their performance this festival edition. This makes Delft Fringe Festival the stepping stone for young theater artists on their way to national productions prominence.

The 2022 festival may be over, but Delft Fringe Festival still has plenty of plans! This autumn, the festival will be touring the country with three audience award winners: Tappin-it Collective (2021), the Prima Donna's (2018) and of course Niek Wagenaar, the brand new winner of 2022.

Put it in your agenda, the next edition of Delft Fringe Festival will take place from Wednesday 31 May to Sunday 11 June 2023.